Hunter showed 5 of his chickens at the Belknap County Fair today….he received 4 out of 5 blue ribbons for his birds, the best in showmanship trophy, a blue ribbon for his poster and runner up on herdsmanship!

Overall a very good first 4H Fair and I think it’s safe to say the Osgood’s have been bitten with the 4H bug! Next year sheep! 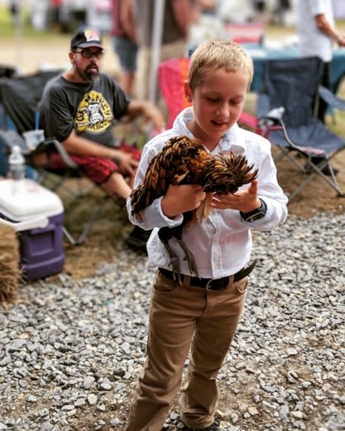 In the summer of 2018, Farmer Ken & I spent a date night (yes, all of our dates seem to be farm related) driving over an hour to North Conway with the goal of checking out a greenhouse Ken had seen listed on Craigslist. That day started an exciting project that has taken over a year to come to fruition.
Once a slope covered with trees and bushes, the now 14′ by 88′ greenhouse rests.  It was a lengthy process to remove the trees, stump, and level but all of that was accomplished before Halloween.  Due to the ledge, Farmer Ken and Uncle Dave used 4″ X 10″ pressure treated wood for the base and all the metal hoops were attached just before the snow fell.

The next spring the goal became getting it ready for the 2019 gardening season.  The greenhouse ends needed to be constructed and the plastic put on.  The plastic covering was such a crazy experience…Ken drove the tractor as his two brothers sat in the bucket and rolled the plastic over the ribs. Please go on our fb page to see the plastic installation video as it was quite amusing.
Again, due to the ledge, we were forced to try something different in our greenhouse as planting in the ground was not an option.   We could’ve gone with raised beds but instead, we decided to use a barrel system in the greenhouse.   We were able to find some “free” former greenhouse tables and decided to cut the barrels in half both vertically and horizontally to accommodate the various plants.  The use of the tables and the heights of the barrels were calculated so there would be no bending when it came to weeding or picking the ripe fruit or vegetables.  Little Farmer Henry helped cut and clean all of the barrels and Farmer Hunter helped load them all with the soil, sand and a peat moss mix.

We started a variety of seedlings under the lights in the basement but didn’t anticipate how many plants we would need.  Originally, we only planned to use a portion of the greenhouse but as construction was nearing completion we decided to go big or go home.  This was a golden opportunity for us to try everything in our first year and learn from the experience. 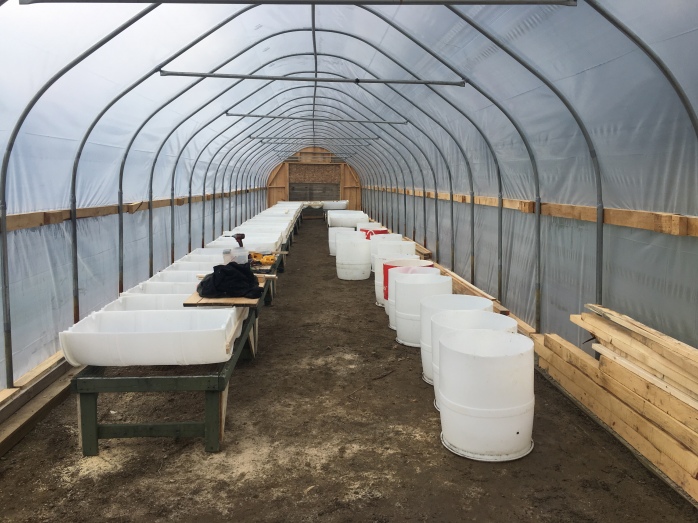 Each barrel is labeled numerically and we have a spreadsheet detailing the exact plant species, date planted, watering needs, etc.  As the summer progresses we will notate what works, issues encountered and what plants would be better suited for our raised beds outside of the greenhouse.   Currently, we’re using the traditional old school watering arrangement of a hand held nozzle and hose but we hope to have a more efficient process in before Summer.   Our greenhouse is doing better than we could’ve expected in our first year especially with how wet and cold this Spring has been.

I always say ” I’m good at keeping children and animals alive….plants not so much” well maybe this year will be the change my black thumb and I need! ~ Farmer Kate👩🏻‍🌾

Yesterday, Ken & I took Hunter to see the documentary “The Biggest Little Farm” …..it was a great movie and felt very much like our daily lives.

Farming is ever changing ….observing how things are working or not working and modifying them until they do. There are very hard days but also amazingly rewarding days….always with the same goal in mind to raise a healthier happier food source for us and you, our customers.

We definitely recommend going to see this movie!!

The first thing to do is clean the farm store Farmer Hunter took that job over . . . .

Once the coolers are unloaded from the truck Farmer Ken & Farmer Kate weigh and tag each roaster. We sell all our meat by the pound and need to mark each for their weight. 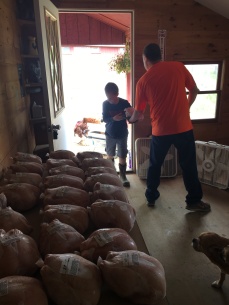 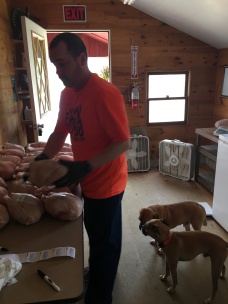 After they are put into the freezer we eat lunch and wait for customers to come to pick them up! 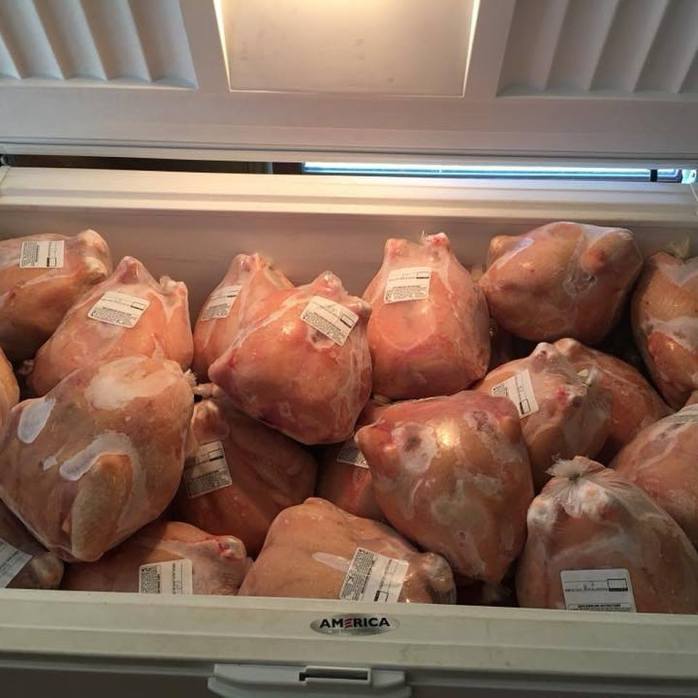 Farming is Not for the Faint of Heart

Farming is not for the faint of heart . . . .I have read this time and time again in farm blog articles or books but had never experienced the pain, frustration, and heartache that the other farmer authors wrote about. That all changed this past December when our Sow Tulip stopped being able to get up and was in a lot of pain.

Tulip & her sister Pumpkin joined our farm in April of 2018. The girls came from a fellow Berkshire breeder in VT. The farmer was downsizing due to health issues and we were very ready to take on addition Sows. Right away they were able to establish a hierarchy with the herd and made their personalities known. Pumpkin is very loveable and is always ready for a belly rub. Tulip, on the other hand, was a little fighter and didn’t like to be touched at first. I was able to wear her down with treats and ear scratches over time. Pumpkin bred right away with our boar, Brewster, but Tulip never took and went into heat month after month.

Come November we had determined that Tulip was just going to be companion pig for Brewster and they would live together during the non-breeding season.

On December 14th, 2018 I went to feed the pigs and noticed that everyone had come running but Tulip which was unusual. I found her laying in their hut unable to put much weight on her back right leg. Ken and I determined she must have sprained it ( which has happened before) and that after a few days she should be fine or we would call in the farm vet for a visit. Over that weekend we were able to get her up, eating and drinking, but she still didn’t leave the hut area. Our local vet does farm visits on Tuesdays so we called and scheduled for him to come by then.

Tuesday came and Dr.Mason conducted a physical exam of Tulip quickly determining that she had broken her back. The only thing we could ascertain was that she must have slipped on ice and injured herself. This is a death sentence for any pig, especially a 400-pound sow. Ken and I started talking about the next steps we didn’t want her to go to waste. Calling local butchers and meat processors we quickly decided that the best thing to do was offer her to a family that could use her for meat. I started hand feeding and watering her every morning and keeping her as comfortable as we could until we found the right family.

The following Thursday, December 20th, I went down in the morning to Tulip the night before she had managed to get out of the hut and I had buried her in straw to keep her warm. This morning when I headed down I hear the squeak of a piglet. SHE WAS FARROWING ON THE ICE & SNOW! I quickly called for back up and our neighbors came to help. Brittney grabbed the piglet and brought it into her warm car under her jacket. Dana came and helped me move the other pigs into another paddock away from Tulip and when Ken got home he helped him move a shelter over Tulip since it had started to rain. 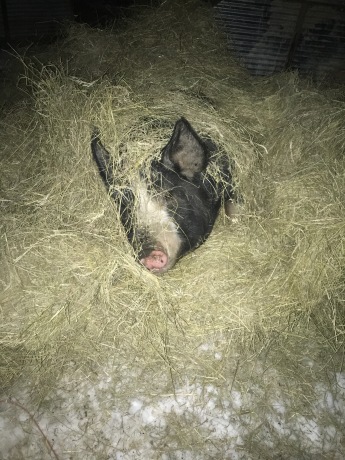 Tulip already had a death sentence she was never going to get better but we didn’t want her bonus piglets to as well. After an examination, I was able to determine that she was not going to be able to have these piglets naturally and she didn’t have milk coming in. I suited up and Ken helped me to pull 7 piglets from her. She ended up having 11 in total 9 were born alive. We moved the 9 piglets into the house and made a makeshift nursery. That story will be in another post!

On Christmas Eve of 2018 Tulip was put out of her misery and given to a family to help feed them throughout the year in total they were able to salvage over 160 pounds of pork.

There has been a lot going on here at the farm this past week . . . but first, it’s meat chicken time! We received 200 chicks in this week which will be ready for purchase as roasters or parts in May.

In February, Birch Rise Farm became the next proud New Hampshire Farm Bureau member. The farm was also chosen to provide the Young Farmers of New Hampshire with turkeys for their 2019 Thanksgiving Charity baskets.

January 2019  Farmer Kate’s parents, Maureen and Rick Thalmann of Oakland, Michigan proudly wore their Birch Rise Farm jackets when they visited the city of Agra and the Taj Mahal during their two-week visit to India. 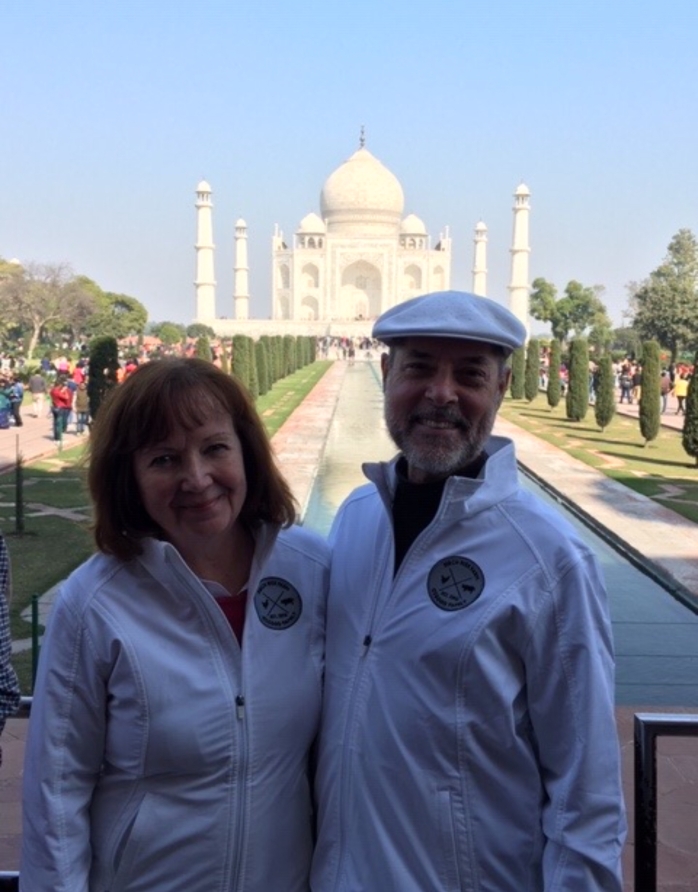 There Are Some New Girls in Town

January 19, 2019 Early Saturday morning Farmer Ken & Grandpa Ken drove to Massachusetts and picked up Laverne and Shirley!  Laverne and Shirley are 16-month-old Berkshire sows who were raised on a small farm with sheep and chickens. Sonny, their previous owner decided that he was not interested in having large farm animals and contacted us via facebook to see if we could give them a great home. Kate and Sonny met in a Pasture Pig facebook group over a year ago when Sonny had posted about having a sick pig and not knowing what to do. The girls have both had two litters of piglets using AI (Artificial Insemination) and have never been around a boar. We were a little nervous about their introduction with the other pigs but the blizzard and very cold weather have helped with the animals staying in their shelters to stay warm and they have not interacted a lot. 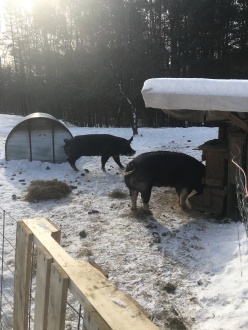 We bought a farm!

In 2015, we purchased the 1772 Birch Rise farmhouse and started renovations. Farmer Ken and his family members worked night and day to get the house ready for us to move in. Then on January 15th, 2016 we moved in! Two weeks later, Ken and I welcomed our youngest farmer, Henry to farm life. 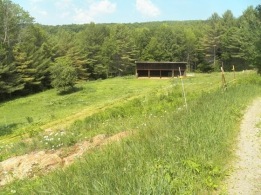 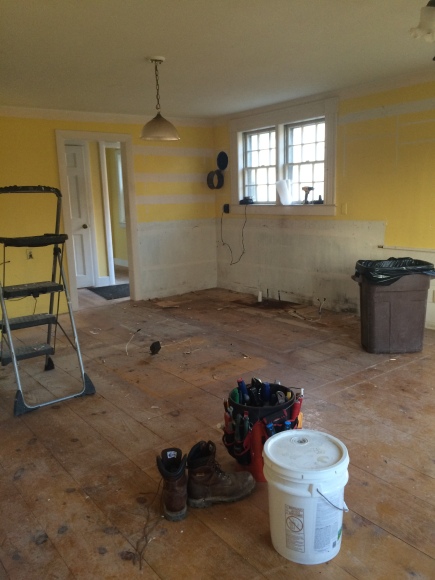 Hunter loves to play in the yard!

Back of the house